A mile and a half long, Lake George is a spring-fed body of water nestled within a steep valley surrounded by Foster, Goodwin, Pinnacle and Whittemore Hills.

People have visited the shore of Lake George since the end of the last Ice Age. The first evidence of early Paleoindian settlement was discovered during two archaeological digs undertaken in 1992. The primitive stone tools that were unearthed during these excavations date to the Early and Middle Archaic Periods
(8,000-11,000 years ago).

In 1892, George Washburn built the Mohican House hotel on the shores of Podooc Pond. Unimpressed with the original name of the pond, Washburn renamed the water body after himself. The hotel was converted to a dining facility in 1922 when the lands and buildings became Camp Modin, one of the oldest continually operating Jewish camps in the United States.

After Camp Modin relocated to the Belgrade Lakes region (where it remains today), the property went up for sale and was purchased by the state in 1992 thanks to funding provided by the Maine Department of Conservation and the Land for Maine Futures (LMF) Program. This purchase filled a recognized need for water-based recreation in west central Maine. A second LMF award added 37 acres and 2,000 feet of shoreline to the property.

Since its establishment, area residents have been actively involved with helping to build and maintain the park, a tradition which continues today. 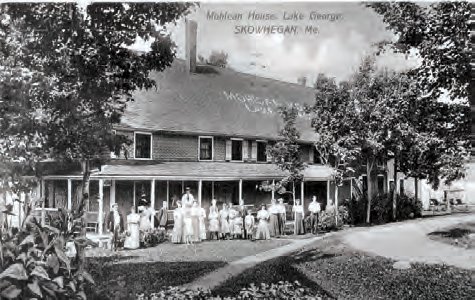